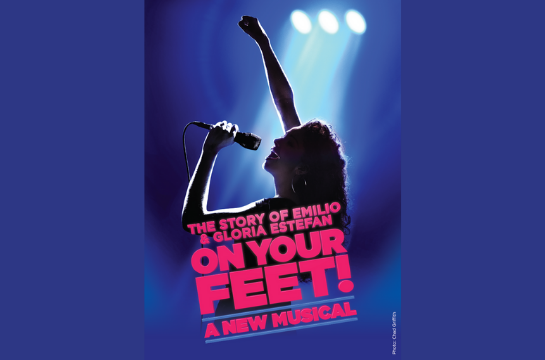 Her voice. His vision. Their story. On Your Feet! is the inspiring true story about heart, heritage and two people who believed in their talent — and each other — to become an international sensation: Gloria and Emilio Estefan. This all-new exhilarating original musical is winning the hearts of critics and audiences alike, with The New York Times cheering, “The very air in the room seems to vibrate in this undeniably crowd-pleasing musical!” Featuring some of the most iconic songs of the past quarter-century, including “Rhythm is Gonna Get You,” “Conga,” and of course, “Get On Your Feet.” Prepare to be on your feet from start to finish! An encore performance of On Your Feet! is scheduled for Friday, February 3, 2023, at 7:30 p.m. Click HERE to access tickets to the Friday performance.
Tickets


Single Tickets Single tickets go on sale August 1, 2022. Single ticket prices range from $27 - $123. Student Rush tickets are $15 and can be purchased on the day of the performance only. Must present a valid student ID. Limit of two tickets per ID. Subscription Information Save up to 15% on tickets when you become a season subscriber. Click above for more information.  Become a McKnight Center Insider Click the button above to join our email list and get updates and ticket offers delivered to your inbox.

Event Details
Date | Thursday, February 2, 2023 Time | 7:30 p.m. Venue | Performance Hall
About the Artists
Gloria Estefan, Music, Lyrics, Orchestrations | With seven Grammy Awards and more than 100 million albums sold worldwide, Gloria Estefan is the most successful Latin crossover performer in the history of pop music. In addition to her 38 #1 hits across the Billboard charts, Gloria recorded the Oscar-nominated song “Music of My Heart” and has received numerous honors and awards over the course of her illustrious career. She has been presented with a star on the Hollywood Walk of Fame, inducted into the Latin Songwriters Hall of Fame, named BMI Songwriter of the Year, received an American Music Award for Lifetime Achievement and won an MTV Video Music Award, two ACE Awards and multiple Billboard Awards for her many chart-topping hits. Gloria has also been honored with the Presidential Medal of Freedom, The Kennedy Center Honors, the Ellis Island Congressional Medal of Honor and the Hispanic Heritage Award. Emilio Estefan, Music, Lyrics, Orchestrations | Emilio Estefan is a world-renowned music, television and film producer who has been instrumental in shaping, developing and directing the careers of his superstar wife, Gloria, as well as Shakira, Ricky Martin, Jennifer Lopez, Marc Anthony and Jon Secada among many others. With a resume that includes 19 Grammy Awards, Emilio is one of the most successful producers in the music business, blending Latin, pop and world rhythms creating his own unique style and world- wide hits. It is this vision that transcends the music field and spills over into film, television, hotels and restaurants, among other business endeavors, including becoming the first Cuban-born minority stakeholder in an NFL franchise, the Miami Dolphins. Emilio & Gloria were the 2015 recipients of the Presidential Medal of Freedom, the first time the honor has been bestowed on a married couple.