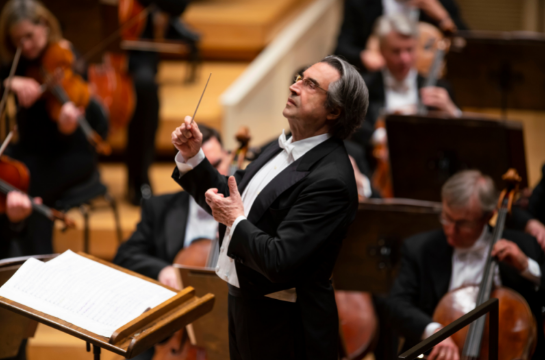 The Chicago Symphony Orchestra is consistently hailed as one of the world’s leading orchestras. Led by Riccardo Muti, one of the world’s preeminent conductors, the orchestra has nurtured its legacy while supporting a new generation of musicians and composers. Mr. Muti has announced his retirement at the close of this season, making this concert an extra-special opportunity to experience his expertise and artistry at the musical podium. The orchestra will perform a varied and engaging program. Based on Heinrich Joseph von Collin's tragedy, Beethoven’s orchestrations for his Coriolan Overture cover themes of war love, and family and showcase his creativity. Beethoven's Eighth Symphony is often ight-hearted and cheerfully loud. Lyadov's Enchanted Lake, subtitled "fairy tale scene", borders on symbolism and impressionism, with the instrumentation creating a lovely bewitching effect. Finally, Mussorgsky's Pictures at an Exhibition was composed in remembrance of his friend, artist Viktor Hartmann, and has become a showpiece for virtuoso pianists.
Tickets


Single Tickets Single tickets go on sale August 1, 2022. Single ticket prices range from $60 - $150. Student Rush tickets are $15 and can be purchased on the day of the performance only. Must present a valid student ID. Limit of two tickets per ID. Subscription Information Save up to 15% on tickets when you become a season subscriber. Click above for more information. Become a McKnight Center Insider Click the button above to join our email list and get updates and ticket offers delivered to your inbox.

Chicago Symphony Orchestra | The Chicago Symphony Orchestra (CSO) is consistently hailed as one of the world’s leading orchestras. In September 2010, renowned Italian conductor Riccardo Muti became its tenth music director. During his tenure, the Orchestra has deepened its engagement with the Chicago community, nurtured its legacy while supporting a new generation of musicians and composers, and collaborated with visionary artists. The musicians of the CSO command a vast repertoire and annually perform more than 150 concerts, most at Symphony Center in Chicago, and, since 1936, nearly every summer at the Ravinia. The CSO also tours nationally and internationally. Since its first tour to Canada in 1892, the Orchestra has performed in twenty-nine countries on five continents in sixty-two international tours. Riccardo Muti, Music Director | Riccardo Muti is one of the world’s preeminent conductors. In 2010, he became the 10th music director of the Chicago Symphony Orchestra. Muti’s leadership has been distinguished by the strength of his artistic partnership with the Orchestra; his dedication to performing great works of the past and present, including 13 world premieres to date; the enthusiastic reception he and the CSO have received on national and international tours and eight recordings on the CSO Resound label, with three Grammy awards among them. In addition, his contributions to the cultural life of Chicago — with performances throughout its many neighborhoods and at Orchestra Hall — have made a lasting impact on the city.