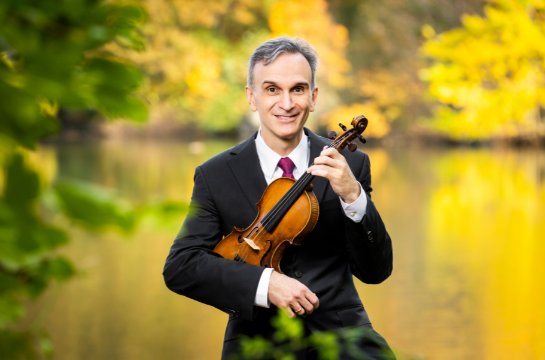 The New York Philharmonic welcomes guest soloist Gil Shaham to the stage to perform one of the most challenging and well-known works in classical repertory, Mendelssohn's Violin Concerto. Mr. Shaham is one of the foremost violinists of our time: his flawless technique combined with his inimitable warmth and generosity of spirit has solidified his renown as an American master. The orchestra will also perform the overture to Mozart's Marriage of Figaro, a lively piece that has been one of the most played orchestral works since its premiere in 1786. Closing out the program is Price's Symphony No. 4. Composed in 1945, the work was never performed during Price's life and was presumed lost until 2009. It has since been praised by modern music critics.
Tickets

Event Details
Date | Saturday, September 24, 2022 Time | 7:30 p.m. Venue | Performance Hall
On the Program
Wolfgang Amadeus Mozart | The Marriage of Figaro "Overture" Felix Mendelssohn | Violin Concerto in E minor, Op. 64 Florence Price | Symphony No. 4 in D minor
Plaza Simulcast
The live concert will be simulcast to the outdoor plaza. Bring your blanket or chair and enjoy viewing the concert for free on the 32-foot LED wall and advanced sound system.
About the Artists

Jaap van Zweden, Music Director | Jaap van Zweden has become an international presence on three continents over the past decade. The 2018–19 season marked his first as the 26th Music Director of the New York Philharmonic. In the 2021–22 season, Jaap van Zweden and the New York Philharmonic perform at Alice Tully Hall and the Rose Theater at Jazz at Lincoln Center’s Frederick P. Rose Hall during the accelerated renovation of David Geffen Hall — scheduled to reopen in the fall of 2022 — and in three concerts presented by Carnegie Hall. Born in Amsterdam, Jaap van Zweden was appointed at age 19 as the youngest-ever concertmaster of Amsterdam’s Royal Concertgebouw Orchestra. He began his conducting career almost 20 years later, in 1996. He was named Musical America’s 2012 Conductor of the Year and was the subject of an October 2018 CBS 60 Minutes profile on the occasion of his arrival at the New York Philharmonic. Recently, he was awarded the prestigious 2020 Concertgebouw Prize. He has appeared as guest conductor with many other leading orchestras around the globe, among them the Chicago Symphony Orchestra, The Cleveland Orchestra, Los Angeles Philharmonic, Vienna Philharmonic, Berlin Philharmonic, Orchestre national de France and London Symphony Orchestra. Gil Shaham, violin | Gil Shaham has more than two dozen concerto and solo CDs to his name, earning multiple Grammys, a Grand Prix du Disque, Diapason d’Or, and Gramophone Editor’s Choice. His most recent recording in the series 1930s Violin Concertos Vol. 2 was nominated for a Grammy Award. His latest recording of Beethoven and Brahms Concertos with The Knights was released in 2021. Mr. Shaham was awarded an Avery Fisher Career Grant in 1990, and in 2008, received the coveted Avery Fisher Prize. In 2012, he was named “Instrumentalist of the Year” by Musical America. He plays the 1699 “Countess Polignac” Stradivarius, and lives in New York City with his wife, violinist Adele Anthony, and their three children.