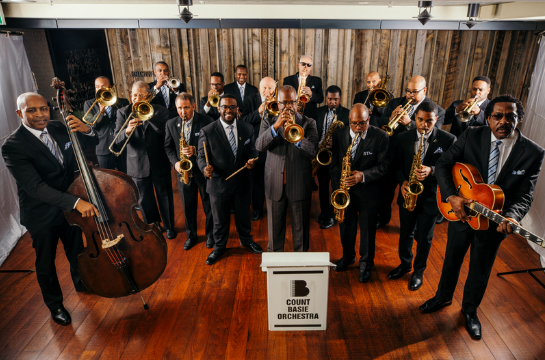 In the history of Jazz music, there is only one bandleader that has the distinction of having his orchestra still performing sold out concerts all over the world, with members personally chosen by him, for over 30 years after his passing. Pianist and bandleader William James “Count” Basie was and still is an American institution that personifies the grandeur and excellence of Jazz. The Count Basie Orchestra continues the excellent history started by Basie of stomping and shouting the blues, as well as refining those musical particulars that allow for the deepest and most moving of swing.
Tickets


Single Tickets Single tickets go on sale August 1, 2022. Single ticket prices range from $28 - $118. Student Rush tickets are $15 and can be purchased on the day of the performance only. Must present a valid student ID. Limit of two tickets per ID. Subscription Information Save up to 15% on tickets when you become a season subscriber. Click above for more information.  Become a McKnight Center Insider Click the button above to join our email list and get updates and ticket offers delivered to your inbox.

Event Details
Date | Friday, March 3, 2023 Time | 7:30 p.m. Venue | Performance Hall
Plaza Simulcast
The live concert will be simulcast to the outdoor plaza. Bring your blanket or chair and enjoy viewing the concert for free on the 32-foot LED wall and advanced sound system.
About the Artists 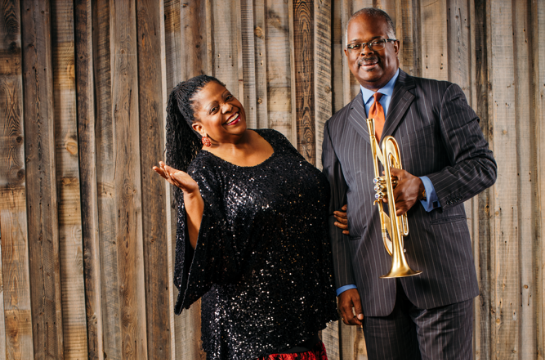 Scotty Barnhart, Director | Scotty Barnhart is an internationally acclaimed Jazz trumpeter, composer, arranger, educator, author, producer, two-time Grammy Winner, and Director of The Count Basie Orchestra. Prior to being selected as Director in 2013, he was its featured trumpet soloist for 20 years, and in 2015 was Executive Producer of A Very Swingin’ Basie Christmas!, the very first Christmas recording in the history of The Count Basie Orchestra. It went to #1 on the charts. Under his leadership, the orchestra won the Downbeat Magazine Readers Poll as the #1 Jazz Orchestra in the world for 2018, and their 2018 recording, All About That Basie, featuring special guest Stevie Wonder, was nominated for a Grammy for Best Large Jazz Ensemble. Carmen Bradford, Guest Vocalist | 2019 Grammy Nominee, Carmen Bradford, was born in Austin, Texas, and raised in Altadena, California. It was only natural that Carmen would follow in the footsteps of her great family legacy, being the daughter of legendary cornetist/composer Bobby Bradford and renowned jazz vocalist/composer/author Melba Joyce. At the age of 22, Ms. Bradford was discovered and hired by William “Count” Basie and was the featured vocalist with the legendary Count Basie and his Orchestra for nine years. She has since performed and/or recorded with; The Count Basie Orchestra, Wynton Marsalis, Nancy Wilson, Lena Horne, Doc Severinsen, Frank Sinatra, Willie Nelson, the National Symphony, Rochester Philharmonic, Dallas Symphony and countless Symphony Orchestras and artists across the world.